Back in 1998 I was selected to compete at the “Jeunes Createur de La Mode” Competition in Paris, France with only having one year sewing experience. The theme of the show was called “The New Millennium” so basically we had to design an outfit that reflected that theme. You can only imagine the stress I went thru trying to decide what I was going to make, I barely even knew how to sew let alone come up with some crazy design. All my sketches had to be approved by my teachers which added to the stress because they kept telling me to come up with more ideas and I was running out of time! One day I decided to browse the architecture book aisle in the library in hopes of maybe finding some kind of inspiration and as I was looking thru the shelves a book about Chinese paper sculpture fell out which was strange because it didn’t even belong there but the light bulb but I became so inspired by these techniques I decided to base my garment around this idea.
I can honestly say that this was one of the most stressful things I ever had to do because not only did I get my materials late, it turns out that the idea I had wasn’t working and I only had 2 weeks left before I was on the plane to Paris. I really didn’t think I was going to make it. So one night after much crying I decided to just take a break and go dancing to clear my mind and while I was at the club it hit me! I knew exactly what I had to do to make my idea work! I worked non stop for those last 2 weeks and did not leave my house until I finished.
The concept behind my design is the invention and the merging of old and new materials.. Paper and Plastic. 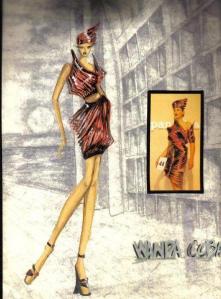 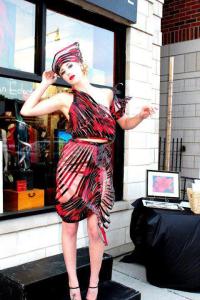